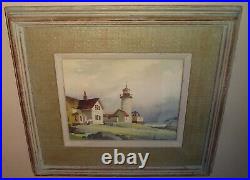 Vintage JOHN HARE “Eastern Point Light” Glouchester Watercolor Painting. Sight size is 6 3/8″ x 8″. Frame is 13″ x 14 3/4″. Signed lower right corner. Frame has wear and chips. Gallery label on the back. He was primarily associated New England, especially Cape Cod, Massachusetts where he spent his summers from 1938 to 1965. However, he was in Florida where he was a member of the St. Augustine Art Association, and other locations on the East Coast. It is likely Hare was born in New York City. He first studied commercial art in Brooklyn at the Pratt Institute and also studied at the Art Students League in Manhattan. He worked for Hearst newspapers corporation, and in 1933 married. In the next few years, he and his wife traveled extensively, camping and painting and exhibiting his work in galleries. In 1935, they visited St. Augustine and an exhibition of his watercolors was held there in the old bank building by the cathedral. In Provincetown, they also exhibited paintings that Hare had completed in Florida. The couple liked St. About 1938, the Hares, attracted to the rolling farmland, moved to Amherst, Massachusetts. He also painted at Gloucester, and from 1967 to 1977, they lived at Yarmouthport, and in 1977, moved to Palm Beach, Florida where he died three years later. The item “Vintage JOHN HARE Eastern Point Light Glouchester Watercolor Painting” is in sale since Sunday, December 13, 2020. This item is in the category “Art\Paintings”. The seller is “kimmly” and is located in Garland, Texas. This item can be shipped to United States.

Theme by Anders Noren — Up ↑